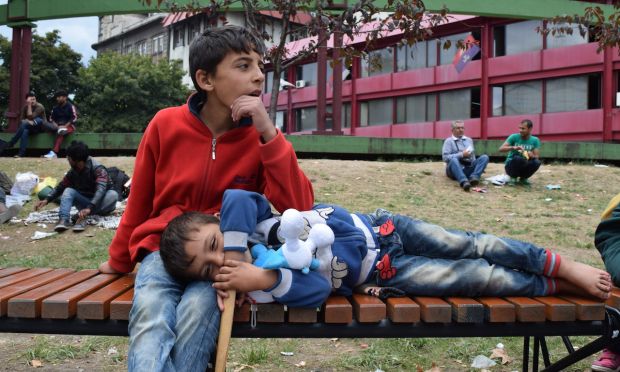 I hated being called a refugee. I felt like my whole identity was put into that one sad word.

So as I stood at the entrance of the city park in Belgrade earlier this week with my team from World Vision, I watched them trying to find a place to sleep on wooden benches, flimsy tents, or thin blankets covering the ground. I saw professors of physics, farmers, dentists, students, engineers, retirees, women, men, and children escaping the horrors of war. And all I wanted to do was to hug all of them and tell them everything will be all right because I know too well how they were feeling.

No one wants to be a refugee.

I was eight years old when we boarded the last convoy of women and children and left our hometown at the beginning of the war in Bosnia and Herzegovina. Our city was being shelled heavily. My mom was pregnant, and my youngest brother was born a couple of days later in the Croatian city of Split. When we first arrived in Split, we waited a few hours in a park until we found a place to stay. I remember being petrified to death by the possibility that we might spend the night there.

That’s probably what 4-year old Yusef and his 11-year old brother Almuseneh were feeling when I spoke to them in Belgrade last week.

“Nights are the hardest. I was used to sleeping normally, and now I have to sleep in a park,” Almuseneh said. His younger brother showed me his little feet covered in blisters from the long walk the family took through Greece and Macedonia. Their shoes were completely worn out, and they have no others.

When I asked their father what he misses the most, he told me simply: “To sit in our home”.

I spent more than two years as a refugee in Croatia, away from my home. I dreamt about the toys I left behind — my heart ached for the Barbie doll that my uncle bought us just before the war started — and I imagined many new ones that awaited me once we finally returned home.

My memories snap me back to reality and my conversation with Yusef and his brother, Almuseneh, in Belgrade. They share one blue Smurf toy that some good person gave them during their long journey. They yank it from each other’s arms every now and then, laughing. That is the only toy they have.

I spent couple of hours in the park that day, talking to men, women and children from Syria. They all shared the dream of safe future for themselves and their families, safe from the horrors of the war.

My heart broke in that park. As I write this, I am thinking about Yusef and Almuseneh.

Their family probably continued their journey towards Hungary. Where are they sleeping this night? Do Yusef’s feet hurt from the blisters? Can he walk? Will Almuseneh grow up to become a vet, like he told me?I pray they grow up to fulfill all of their dreams and no longer be refugees.

The story was first published as part of CNN iReport.
Photo: Aida Šunje